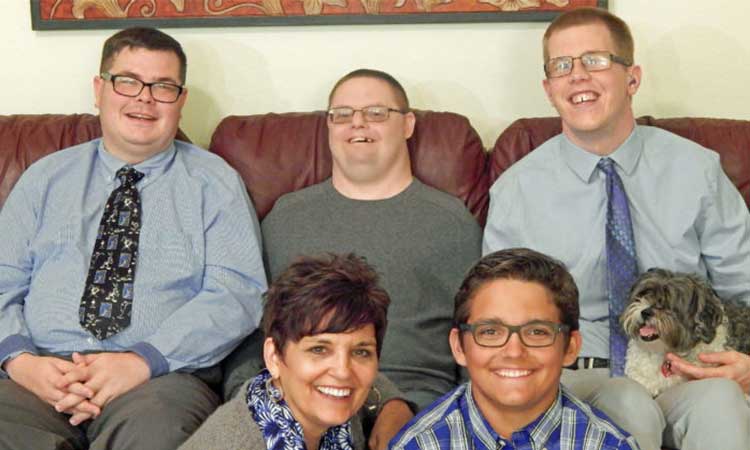 For Suzanne Revers, it all started with an extra bedroom. Her daughter had moved out to start her own family, and her teenage sons, Andy and Dawson, were getting older. Like many parents adjusting to an empty nest, Suzanne began to consider what the next stage of her life would look like.

She considered renting the room out, figuring she could use the space to generate a little extra income for her family. Then she read an article about Sevita’s host home program for adults with intellectual and developmental disabilities.

“I was immediately intrigued,” Suzanne said. “I had never heard of a program like this. I liked the idea that people with disabilities could have a housing option like a host home that allows them to be active and live their lives in regular family homes.”

Ready to make a difference

Suzanne called Sevita and spoke with a recruiter, who explained how the organization helps people just like her become host home providers called Mentors. She knew from raising her son Andy, who has Down Syndrome, that being a Mentor could be challenging. But Suzanne knew she could be a great Mentor.

In 2012, Suzanne was matched with Mason, a young man who had been living in a group home with other adults with developmental disabilities. Mason liked the group home, but he wanted to live with a family. He wanted more personal support and a better focus on achieving his goals of finishing school and finding a job.

Mason’s motto is “My Great Life,” and he’s living it each day. With Suzanne’s support, he graduated from the local transition center, which had helped prepare him for the job he has excelled at for five years, clearing tables at a grocery store and cafeteria. Mason also attends his local community college, where he is pursuing a four-year Computer Support Specialist’s degree in cyber security.

Since moving into Suzanne’s home, Mason has also achieved many goals that have allowed him to have fun and feel a sense of accomplishment. He took his first plane ride, went to Disney World, and joined a club on his school campus. Mason has also maintained a strong relationship with his family, who live an hour away. He has many friends in the community.

Mason says, “I have more freedom to do the things that I want to enjoy.  I have more confidence and independence.”

The host home was such a great success for Suzanne and her family that in 2018 she decided to welcome a second individual into the home. Like Mason, Shawn had been living in a group home and wanted more independence. Suzanne says that moving Shawn into her home went smoothly, and he brought with him a lot of humor and personality.

Shawn says, “I like the host home program because I like hanging out with my housemates, and I can do lots of fun things.”

Shawn attends a day program, where he enjoys volunteering, spending time with friends, and making art. He hopes to one day begin training for work in the community through Sevita’s vocational services.

Shawn is blossoming as he has gained more independence and discovered new interests. He participated in the Special Olympics bowling program, and he and Mason went on vacation together to Branson, Missouri. Shawn stays connected to his family. He loves to make people laugh and brings a sense of fun to all of his relationships.

Success at home and in the community

Suzanne says Mason and Shawn have had a positive impact on the whole family. That includes her sons, who have developed close friendships with both of them.

“It really has been a perfect fit in both situations. It’s changed our lives,” Suzanne says. “I’m glad every day that I’m doing this because I get to see Mason and Shawn develop their gifts and work towards becoming all that they can be. The one-on-one mentoring is key, and there’s a whole team of people here who we can count on for support.”

It’s changed our lives. I’m glad every day that I’m doing this because I get to see Mason and Shawn develop their gifts and work towards becoming all that they can be. Suzanne Host home Mentor

In our host homes, individuals live with caregivers we call Mentors. As a host home Mentor, you can help someone live well in their community. Find out how!